Why I Love Art Museums

You learn the most amazing things from the artists of the world, sometimes. Let me share a couple of fun examples that I recently discovered. I was over at the Nelson-Atkins Museum of Art yesterday (our local museum in Kansas City), mapping out a route for the field trip my class is going to take there tomorrow.

The field trip is about Notan, Chiaroscuro, and still life—and I found some good resources, of course (the Nelson-Atkins is an awesome museum). But I had more fun collecting oddball bits of knowledge I never dreamed I’d encounter.

First of all, who would have thought that the Netherlands in the 17th century would be a place to look for Italian Greyhounds? People who know me are aware that I’ve been trolling the listings on Petfinder.com recently, seeking to correct my current, deplorable state of doglessness with an “IG.” But I really didn’t expect to see any in Gallery P17.

I was wrong. First of all, there was Jan Steen’s the-more-you-look-the-more-you-see-in-it painting, Fantasy Interior with Jan Steen and the Family of Gerrit Schouten (1659-60), which I can share with you because the Nelson allows non-flash photography of its own collection (thank you!!). 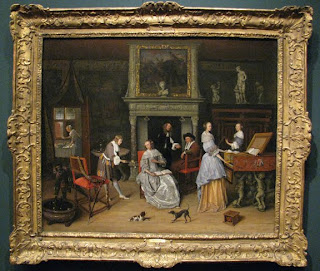 Do you see it? Right there, front-and-center, is a little dog that—if it isn’t an IG—certainly is a dead ringer for one. 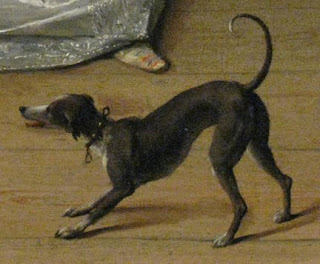 Wow, I thought. Dutch winters are cold. I wouldn’t have expected an IG to do well in unheated buildings there, but it’s hard to argue with the historical record. I continued on, and promptly encountered this painting. 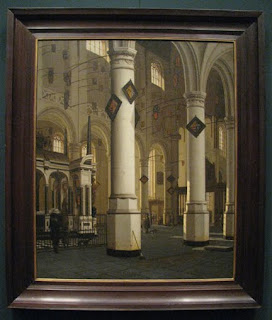 This is Hendrik van Vliet’s Interior of the New Church at Delft (ca. 1660-70), and what are those two small creatures at lower left and center? They look extremely much like Italian Greyhounds to me. What do you think?

They are too small to be greyhounds or whippets (whippets weren’t bred till the 19th century in England, anyway). No, they’re IGs. And you also might note they are strolling nonchalantly with their families . . . inside a big new church that was the pride of the community. Dogs in church? Cool!

But the fun wasn’t over yet. Did you know that, according to a Roman Catholic tradition in Boulogne, Italy, St. Luke (the Gospel-writer) was an artist? They have a revered icon there of the Madonna, and tradition has it that St. Luke painted it. I learned this in Gallery P14 when I discovered Saint Luke Displaying a Painting of the Virgin (1652-53), by Giovanni Francesco Barbieri, whom the information card said was called “Il Guercino.” 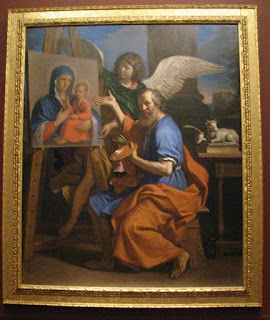 Of course, Il Guercino, in true Baroque style, didn’t try to make the icon look like an icon. But it was an interesting idea to me that one of the “biggie” saints might be thought to have been an artist. Later, I looked up more information on Il Guercino, and discovered that his nickname means “he who squints.” Was he nearsighted, I wondered. No. According to Wikipedia, that source of all kinds of wonderful knowledge, Il Guercino squinted because he was cross-eyed.

Cross-eyed? Talk about an occupational disability! Can you imagine any guidance counselor in his/her right mind saying, “Sure, Willie! Art sounds like a great career! Go for it!” to a kid who was cross-eyed? But you know, old “Squinty” turned out to be a pretty darn good painter. It just goes to show, you should follow your dreams, eh?

All in all, it was a fascinating excursion. Dogs in church, and cross-eyed Baroque masters: who knew? And that’s why I love art museums.