My artwork was on view September 2-19, 2010, at the Johnson County (Kansas) Library’s Central Resources Center.  This post shares images and commentary from that show.
The "Work: In Progress" show spans several decades, and gives kind of a past/present/future view of my work. It included some of my 2-D work from my "first art career" in the 1980s, all of the current paper sculptures, and sketchbook pages, which show some of my works in progress--a glimpse of the future.
In my last post, I showed the work from the south-side display case, which focused on my fantasy artwork, and included 2-D pieces dating back to the 1980s, when I was showing and selling my artwork exclusively in the science fiction and fantasy genre.  In this post, I focus on works from the north-side display case, which address a variety of non-genre subjects. 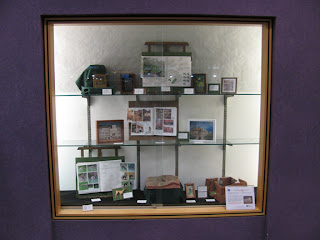 The northern (right-hand) display case at the library was devoted to work on a variety of topics. 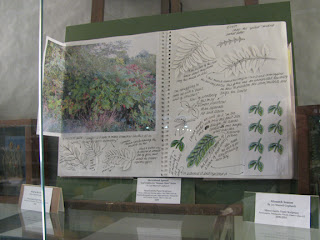 Development pages for "Midwest Flora" Series, 2009.
In September 2009 I took a series of photos near the site of the Hidden Glen Arts Festival, Olathe, KS, which formed the nucleus for a new series. This sketchbook spread shows some of the studies I did for what I intend to be an ongoing series. 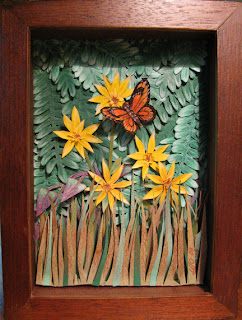 "Monarch Season" 2009-2010, mixed media paper sculpture.
This was the first piece I started, in the "Midwest Flora" series. It includes four species of plants, as well as a Monarch butterfly, created to scale. 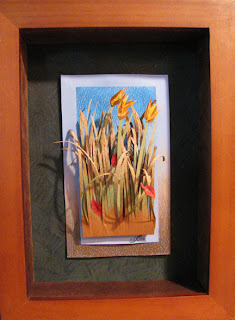 "Wind in the Grass" 2010, mixed media paper sculpture.
I used a "design approach" to create this small piece, floating a "cropped" rectangle of grasses against a textured background. It also is part of my ongoing "Midwest Flora" series. 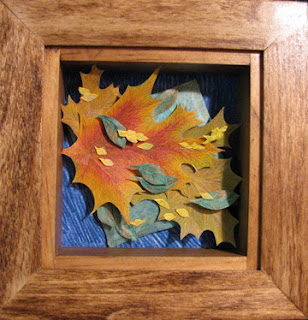 "Windblown" 2010, mixed media paper sculpture.
In this piece I returned to my love of rendering leaves (see "Treetop Primaries" and "The Leaf Thing" in the Fantasy Subjects album for this show). My objective was to explore the expressive possibilities in making the leaves seem not only like they were blowing in a wind gust, but also to explore ways of "floating" them above one another so they would seem airborne. This piece is the third one completed so far, of my ongoing "Midwest Flora" series. 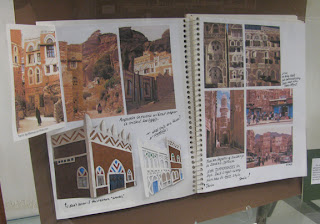 Development pages for Yemeni Architecture Series, 2010.
Ever since I first discovered the beauty of traditional Yemeni architecture, I've wanted to make art about it. Greatly aided by Google Image Search, and later by my treasured friend Zaid, I have been attempting to do justice to these amazing structures in the medium of paper sculpture. This is just one of many spreads from recent sketchbooks. 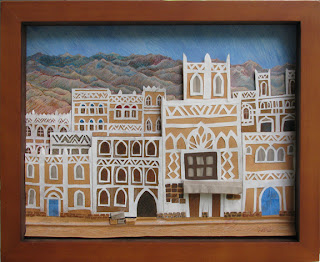 "Sana'a Fantasy" 2010, mixed media paper sculpture.
This was the first piece I created, based on the wonderful traditional architecture of Yemen. Unfortunately, some of the architectural features truly are "fantasy." When I showed it to my dear friend Zaid, he gently informed me that the windows are all wrong. I now am at work on several pieces that attempt to portray the windows of Old Town Sana'a more accurately—but in the meantime, I still felt the dimensionality of the buildings and mountains created an interesting design. 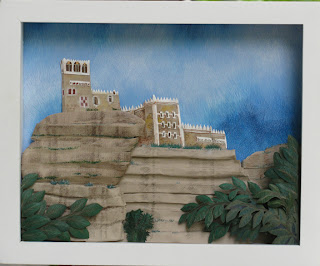 "House on a Rock" 2010, mixed media paper sculpture.
This piece is based on architecture from the mountainous northeast part of Yemen, though once again my extraordinarily helpful friend Zaid has alerted me that I've mixed different villages' styles. I'll try to do better in future works!  There were multiple challenges involved in cutting these pieces in perspective, in reverse (the construction lines are on the back).  However, the hardest part of making this piece has to be the rocks. I added the Prismacolor pencil marks before folding, so I had to do a lot of imaginative visualization to get them to come out looking right.  I now list "can fold rocks" as one of my super-powers. 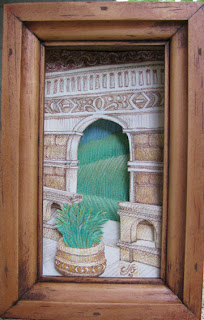 "Through the Arch" 2010, mixed media paper sculpture.
This small piece also is an architectural study, but it is not based on the buildings in Yemen. It was more an exploration of the ways I could combine the optical illusion of drawn shadows and highlights to create visual texture, with the actual dimensionality achieved by layering several depths of real texture. 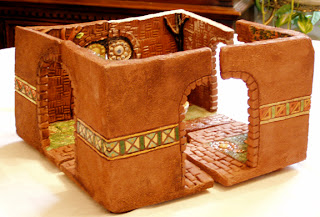 "Four Seasons Courtyard" 2007, earthenware and glaze.
I based this piece on traditional Islamic garden design (as a microcosm for Paradise). Each corner references a different season—perhaps it is not the most subtle expression of the idea that we live in Paradise right here on earth, but I had fun with it. 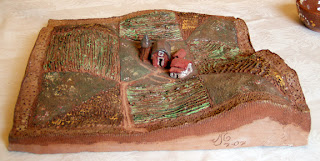 "Fields Like Patchwork" 2007, earthenware and glaze.
Aside from the pun in its name (the fields are laid out like a 9-patch quilt block), this piece also expresses my love for the beauty of the earth as seen from an airplane window.  I deeply loved working with handbuilt ceramic sculpture, and would like to explore this medium further in the future. 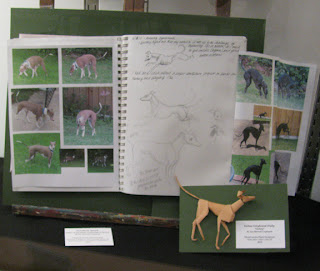 Developmental pages for "Italian Greyhounds" images.
I've always loved the sleek beauty of sight hounds, so naturally when I came to own a pair of Italian Greyhounds, I knew sooner or later they'd show up in my artwork.  The tan-and-white dog in the photos on the left side of the page is my dog Jake. The little black one on the right is my Brenna.  As you can tell from my little "first prototype," I'm still working on how to turn them into paper sculpture. I've nicknamed this little guy "Oakley," because his color reminds me of a dog owned by my friends Brad and Jessica.
I hope you have enjoyed looking at the artwork in my "Work: In Progress" display.
Posted by Jan Gephardt at 2:58 PM No comments:

“Work: In Progress,” The Fantasy Collection

My artwork was on view September 2-19, 2010, at the Johnson County (Kansas) Library’s Central Resources Center.  The "Work: In Progress" show spans several decades, and gives kind of a past/present/future view of my work. It included some of the 2-D work from my "first art career" in the 1980s, all of the current paper sculptures, and sketchbook pages, which show some of my works in progress--a glimpse of the future. 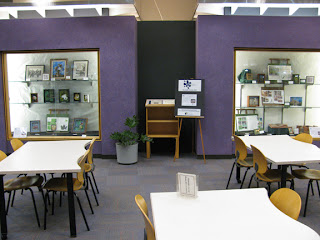 The left-hand (southern) display case focused on my fantasy artwork, and this collection is the focus of this post.  I'll focus on the other display next time.
The fantasy collection included three images from my “first art career” as a science fiction and fantasy artist/illustrator in the 1980s, as well as my current, mixed media paper sculptures, many of which have been shown at the ConQuesT, Conestoga, and Capricon science fiction and fantasy conventions.  All of the paper sculptures were displayed in the “Paper Dragons” show, Roeland Park, KS, March 2010. 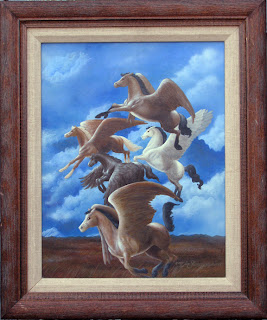 "Stormwings" 1985, acrylic on Masonite.
This painting took 6 months to create, from first sketches through final brushstroke. Back in those days, I had to rely on images clipped from publications, for reference material. It took a week to find a grainy newspaper image of ducks taking off from a pond, that I could use for "wing" reference. Nowadays, I'd have hundreds of images available with one image search! 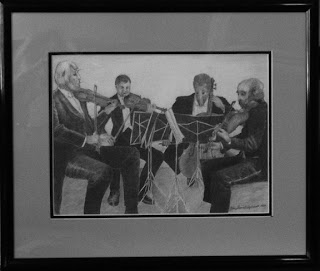 "Harmony" 1984, graphite on paper.
I used this drawing for our "Christmas Print" in 1984, and displayed it at numerous shows. 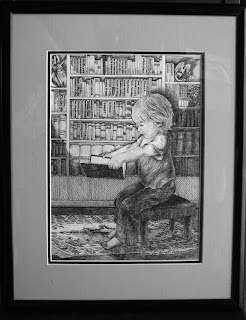 "Enlightenment" 1988, ink on Bristol board.
This piece was used for a "Christmas Print" in 1988. The model for the little boy was my son Ty, who was two years old at the time. The titles on the spines of the books on the shelves behind him were all titles of books written or published by people on our Christmas mailing list that year. 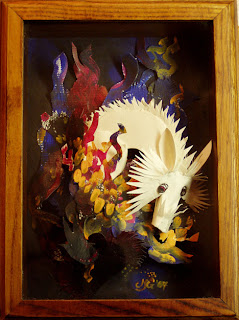 "The White Dragon in His Cloud" 2007, mixed media paper sculpture.
This was my first piece of paper sculpture.  I'd been thinking about the possibilities of making dragons in paper sculpture for quite some time, and a few months earlier I'd spent a fun afternoon doing somewhat nonobjective acrylic paintings.  I wasn't sure what to do with them, however, until one day I sat down and began to make my little dragon.  This piece took an afternoon (and the better part of two years) to make. 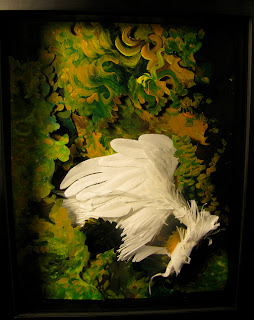 "A Nest in the Wildwood" 2009, mixed media paper sculpture.
I used painted bits for the background that date back to 2007, but the rendering on the feathers is more sophisticated than my little "White Dragon." 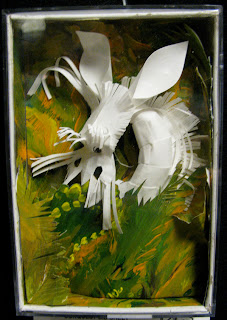 "The Wild Thing in the Weeds" 2009. Mixed media paper sculpture.
This piece was completed not long after "Wildwood," and I drew my materials from the same sources. 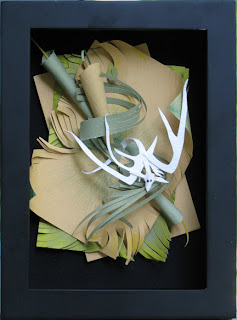 "Bone Dragon" 2009, mixed media paper sculpture.
Kindly lent from the collection of Karin I. Frank.
This was my first exploration of some of the more abstract possibilities of paper sculpture. 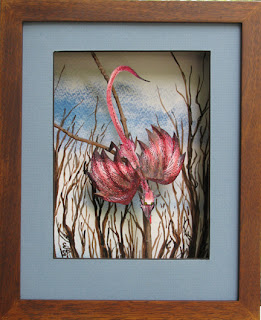 "Denizen of the Winter Trees" 2009, mixed media paper sculpture.
I spent several months developing the prototype pattern for this dragon form. You'll also see that I created variations on it for another piece, "Treetop Primaries." This artwork also incorporates a real silver maple twig. 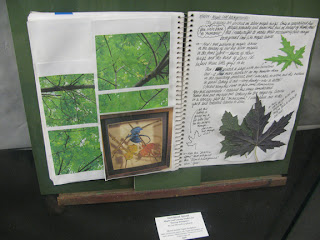 Development pages for "Treetop Primaries," 2009.
The "Work: In Progress" show attempted to show something of my process for creating artwork. To that end, I included four sketchbook spreads, including this one. 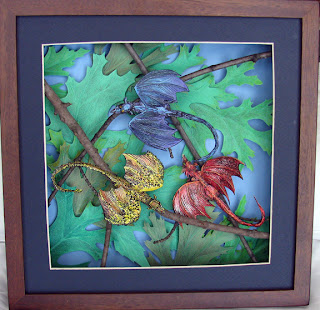 "Treetop Primaries" 2009-2010, mixed media paper sculpture.
Completed in 2009 (see the "Development pages" that were displayed with it) and adjusted in 2010, "Treetop Primaries" is the largest paper sculpture I had created by the time of the "Work: In Progress" show. I developed the dragon forms from the pattern originally developed for "Denizen of the Winter Trees," and also incorporated several real silver maple twigs into the design. 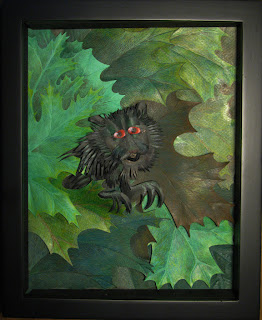 "The Leaf Thing" 2010, mixed media paper sculpture.
I so enjoyed working with the leaves in the background of "Treetop Primaries" that I made some more . . . then wondered what kind of fantasy creature might inhabit trees where tiny dragons live. I kept calling this piece "my 'leaf' thing" while doing the initial development, and finally decided that the creature also was a "Leaf Thing."
The fantasy collection made up half of my "Work: In Progress" show.  In the next post on "Artdog Observations," I'll show the rest of it.
Posted by Jan Gephardt at 11:17 PM No comments: