Stimulate the Economy! Yes, the Arts DO That!

Even to the One Percent, that isn't exactly chump change (though the Kansas-based Koch Brothers have spent far more this year on their political agenda).

To the rest of us, those numbers look dowright impressive.

According to an article published in today's Kansas City Star, a pair of studies by Americans for the Arts has calculated that my home town benefited to the tune of those impressive numbers in 2010, thanks to the economic engine that is the nonprofit arts community in our town.


The Arts and Economic Prosperity IV Report seeks to measure the "quantifiable economic impact of nonprofit arts and culture organizations and their audiences." The Local Arts Index is new this year, and was designed "as a tool to better understand the characteristics of the cultural life of individual communities." 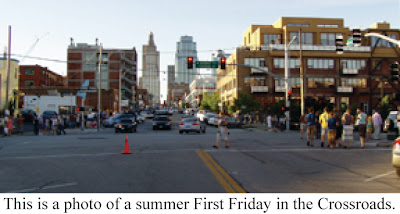 Some other towns realized even more benefit, some less. But these reports tell--yet again--a story that should be clear to anyone who's been paying attention: far from being a "frill," the arts are economically important.

Artists are often urban pioneers, spearheading renewal in run-down neighborhoods--just as they have done in the Kansas City Crossroads, and are attempting to do in our West Bottoms and on Troost Avenue. Arts and culture are an important factor in determining a city's "livability." They foster and enhance an environment where innovation, renewal, and growth builds a more vibrant tomorrow.

Yet still it's hard to get many people to see this value. Perhaps reports like the ones reported on today will begin to open a few more eyes.

PHOTO CREDITS: The beautiful image of the Kauffman Center is from a photo gallery of images posted on the Inhabitat website (I highly recommend you go look at them, and get to know the Inhabitat site; they have many wonderful things!).  I took the Crossroads photo, myself.

I was fascinated to discover an article in a recent issue of Science News, titled "Stone Age Artists Produced Movies," by Bruce Bower.
Well, not movies as we know them.  But the Stone Age artists left rudimentary animations on the walls of several European caves. Archaeologist Marc Azema (University of Toulouse-Le Mirail, France), whose work was spotlighted in the Science News article, has created a wonderful animation, showing an interesting collection of them (via YouTube):

Azema has been involved in a number of film and animation projects, and has been a presenter at the Annecy International Animation Film Festival as well as other places.
The Science News article also included photos of a bone disk, engraved on both sides (one shows a standing deer, the other a deer with its legs drawn up under it). Stringing an animal sinew through a hole drilled in the middle and spinning it creates an optical illusion of the deer jumping or lying down (depending on your interpretation).
This is called a thaumatrope. The idea was re-invented in the 19th century; thaumatropes were popular toys in Victorian times, but not many realized until recently that Stone Age Europeans used them too.
I took the images of both sides of the bone disk, using photos printed in my copy of the magazine, glued them to cardboard, and tied them with upholstery thread to simulate the sinew.  It works pretty well.
A much more recent animation was discovered on a 5,200-year-old Iranian cup--until recently thought to be the world's oldest animation (though it can't compete with Chauvet Cave's 30,000-32,000-year age). I have been unable to get my Blogger interface to let me embed the "jumping wild goat" animation (Go to Major Durant's Photobucket page to see that), but here's a look at the sequence of images on the footed bowl/cup:
I had a great time looking at these, and I hope you enjoy them, too!


PHOTO CREDITS: Many thanks to Marc Azema for the YouTube video of the cave animations. The photo of M. Azema in his element is from the Annecy International Animated Film Festival's online 2012 archive. My son Ty Gephardt took the photos of my homemade thaumatrope. The images from the rim of the Iranian bowl are from the Circle of Ancient Iranian Studies website, and the image of the bowl itself is from T. Lee Harris's "Comments from the Peanut Gallery" blog. My gratitude goes to all! Please go look at their sites for more cool information.
Posted by Jan Gephardt at 6:00 AM No comments:


Last winter I had a pleasant opportunity to create a series of ink drawings to illustrate a poetry chapbook by a friend of mine, Karin L. Frank.

My first thought, when my friend approached me, was, “a poetry chapbook? Seriously?”

Ah, but then I read the poems.

Several had already been published in other—as in, “mainstream”—print media, such as the Kansas City Star or Isaac Asimov's Science Fiction.

I’d already known that my friend wrote interesting science fiction (prose), but the marriage of sophisticated science concepts with the poetry art form produced something rich and extraordinary indeed.

Karin titled her chapbook A Meeting of Minds: Poems from the Two Cultures, a reference to C. P. Snow’s concept of the sciences and the humanities as being two different “cultures” in “the intellectual life of the whole of Western Society.”

My holistic view of the world sees the two as integrally linked as the sides of a coin—not a strange thought to science fiction readers and writers. But the rest of Western society appears to see more of a chasm between the two.

If a chasm exists, however, these poems bridge it to elegant, often humorous satisfaction. Poetry is too seldom appreciated, these days, unless it is in the form of song lyrics. I hope some of my readers will find it worthwhile to click the Amazon link or go to Wolfweyr and open Karin’s rich vision for themselves. 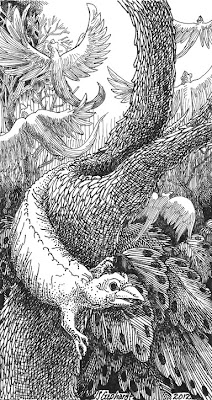 Meanwhile, she’s authorized me to offer a sample:

Ecological Niche
She finds her level
on a suitable tree
where sunlight strikes,
nestles at the spot
where grubs grow plump
for baby birds,
nurtures and grooms
until wings feather out
and flocks of fledglings depart.
She remains and ripens.
Matured, plumage
reverted to scales,
she slithers down the tree,
and returns to earth. 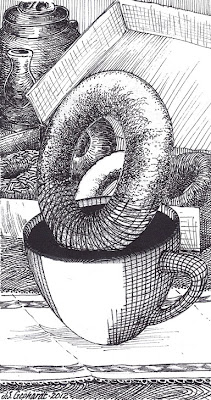 Topological Twist
A torus and a cup
are alike to a topologist
but it’s messy
when I try to
Drink tea
from the doughnut
I’m dunking in it.

A Meeting of Minds: Poems from the Two Cultures is available from Amazon or directly from Honey Bee Publishing, via Karin's blog Wolfweyr.
Posted by Jan Gephardt at 10:17 PM 4 comments: