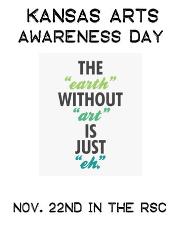 A group based at Wichita State University, led by Sahar Eshghi and Robert Eastman, sponsored a day of activities and advocacy to support the Kansas Arts Commission today.

The KAC was de-funded this year in a misguided effort by the Brownback Administration to cut "wasteful" spending from the state budget.

I couldn't find a web page (or you'd have seen a link already) for this group. On their Facebook page they state their objective: "Kansas is currently the only state in the nation without a viable Arts Commission. By raising awareness on campus and generating support, we can lobby the State Legislature to reinstate funding to our Arts Commission."


Unfortunately, of course, the state legislature already has tried to reinstate funding. In a move that attracted nationwide attention, Brownback vetoed their effort. But that doesn't mean we can't continue to try getting through to the Brownback gang.


I could not make it to Wichita to participate in the event, but I'd like to express my wholehearted support for this initiative. The Brownbackward de-funding action has actually cost Kansas money, and has yanked support from a vital part of the state's economic engine.


As Eshghi and Eastman put it, "For every public dollar invested in the Kansas arts, $9 are generated. It has been proven that communities who support the arts not only enhance their quality of life, but also invest in their economic well-being."

This is not a new topic for me--I protested in this blog space in February when Brownback first insisted on this ideologically-oriented misstep. Ignoring the financial realities and brushing aside the popular outrage, the governor has kept his eyes on the national stage.

He is particularly courting the most right-wing, all-government-is-bad-government, arts-are-frills-for-liberals fringe. He's already planning to run for president in 2016; our state is just a stepping-stone, and our Arts Commission was just an ideological talking point, as far as he was concerned.