The Kansas City area has been hit with a LOT of snow in the last couple of weeks.  It has messed up traffic, and disrupted people's plans . . . but it's brought with it some beautiful visuals.

PHOTOS: All photos were taken 2/26/2013 by Jan S. Gephardt.  Please do not use without attribution and a link back to this post.  Thanks.
Posted by Jan Gephardt at 8:18 PM 2 comments:

Arti Gras is On

Pascal and I went to the Leawood Foundation's "Arti Gras" Gala tonight, a fundraiser to open their Annual Juried Art Show.  For the second year in a row, I am in the show!  This year's accepted entry is Rose Dance.

The photo my husband Pascal took of me with Rose Dance and the artwork just above it, In the Garden of Glen, by R. Gregory Summers illustrates some of the show's range.

For a view of all the artwork in the show, go to the 2013 Arti Gras Gallery and scroll down.

The Arti Gras Show continues, with FREE admission, 11-4 on Saturday and Sunday.  If you're in town and have time, it's well worth the trip to see the art.

My favorites:
Norma Herring probably takes "first place" with me in this show.  I've been an admirer of her detailed mixed-media paintings since last year.  They are large but very intricate.  She had two in the show: my personal favorite, The Secret Byway, and Guest Juror James Martin's #1 "Best of Show" choice, Shades of Autumn.

I believe I recall correctly that both Schlotterback and Heaton are art teachers in nearby school districts.  Knowing how much work a public school teacher must do each day, I am all the more impressed with their fine art accomplishments!

I'm a sucker for painterly passages and intricate detail, but he takes a different approach. He says that once he's satisfied of the artist's overall competence, he primarily looks at the composition.  "A lot of artists almost get it right, and nobody does it every time, but when they do it just feels right.  That's what I like."

As Martin noted, it was a strong show. And you can still see it if you're in town! 11-4 Saturday and Sunday.  FREE admission.  Such a deal!

PHOTOS: The photo of Jan with Rose Dance is by Pascal Gephardt; the other two photos are by Jan S. Gephardt.  We allow re-posting with attribution and link-back, and no alteration of images.  Otherwise, all rights reserved.

Posted by Jan Gephardt at 2:22 AM No comments:

Revival: the Goal--ARTS: the solution

A recent issue of the Kansas City Star featured Lexington, MO, the winner of a competition sponsored by the University of Missouri (MU)'s MU Extension.  The prize is for faculty and students from MU to help the winning small town develop an arts-based "revitalization."

The Star article quoted Lexington resident Chris Campbell explaining the idea: "the strategy is to use the arts as a vehicle for economic and community development."

This is not a way-out idea. More and more municipalities all over the country are looking to the arts as a remedy for their economic woes.  Here are articles about other arts-stimulus efforts in Bennington, VT, Philadelphia, PA, and the states of Texas, North Carolina, and Montana.

I wrote other posts on this subject last summer, in July and August.  The evidence just keeps growing. At least some of the folks in Missouri "get it."  Now if we could just convince the "Kansas side." Governor Brownback, that especially includes you!

IMAGE CREDIT: The Kansas City Star photo of Lexington's Main Street is by Jill Toyoshiba, a photographer to keep in mind.  Many thanks to them, for providing it!
Posted by Jan Gephardt at 6:00 AM 2 comments:

My Beloved has been busy, doing his part to get Rose Dance ready for the Arti Gras Gala this weekend.  I thought you might enjoy seeing the framing work in progress, because it has presented some challenges.
I am grateful to Randal Spangler and New West Frame and Moulding for their help with acquiring the materials for this frame, and oh, boy, do I ever owe my husband Pascal Gephardt a "big one," for all the joining and assembly.  When you see Rose Dance all framed up, it will be thanks to them (stay tuned).

IMAGES: All photos were taken by me, Jan S. Gephardt.  Please do not reproduce them without attribution and a link.

Sometimes paper sculpture takes a long time.  Lots of layers, lots of pieces, not very many finished things to show in between times.

So I thought I'd offer a glimpse of a work-in-progress.  This is part of the "Dark Cycle" of my new piece Nine-Part Herbal Fantasy.


Not much more to say.  Hope you enjoyed the glimpse!

I just found out the address I had for the Feb. 15 Book Signing/Art Show is WRONG.

Please make note of the CORRECT address, if you were planning to come!

We will be a Prospero's Uptown Books, at 3600 Broadway #107, Kansas City, MO--not the location on 39th Street previously publicized.

If you're on Facebook, learn more at the Prospero's Uptown Books page and on the Event notice.

It'll still be my artwork, Grace Townley's artwork, and Robin W. Bailey, signing his many books.  I also am told there will be zombies!

Come if you can.
Posted by Jan Gephardt at 10:44 PM No comments:

3 Opportunities to See my Artwork!

Depending on where you live, you may have a chance to see my artwork at a show near you in February!

SheVaCon, Feb. 8-10, 2013
The first opportunity comes the second weekend of February, in Roanoke, VA.  Several pieces of my fantasy artwork will be on display at the SheVaCon Art Show. The show runs Friday through Sunday, February 8-10 at the historic Hotel Roanoke.

Robin W. Bailey is a former president of Science Fiction Writers of America (SFWA), one of the founders of the Science Fiction and Fantasy Hall of Fame (see another post about it on the KaCSFFS Blog), and is the author of numerous books, e-books, short stories, and poems.

I especially want to thank Robin for the idea of turning his book-signing into an event that includes a chance to show artwork, as well!

Grace Townley is an accomplished oil painter whose passion is outer space. Her "Interstellar Weather" portfolio gives a representative sample of her work, which ranges from very large paintings to a wide variety of affordably-priced prints.

The image at right is one of my favorite examples of Grace's work. I first encountered Grace at the Art Westport show in September 2012, and she joined a group of us in December for the Holiday Visual Feast.

Since a good bit of my fantasy artwork probably won't be back from SheVaCon by then, I'll be showing a mixture of fantasy, nature, and architectural themes, including pieces from my two new multiple-original editions. 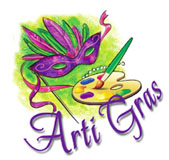 This is a delightful, Mardi Gras-themed reception, to open the show and announce the recipients of several cash prizes. Most of the artists will be there (including me!), and if it's anything like last year the food and drink will be delicious. It's a fundraiser for the Foundation, so there is an admission fee.

Please note that the address for the Feb. 15 book signing/art show location has been updated from the original post.

IMAGE CREDITS: Many thanks to SheVaCon and the Hotel Roanoke for the photo of the hotel.  I would like to thank Robin W. Bailey, both for the use of his profile photo from his official website, and also again for inviting me to show artwork at his book-signing!  Thank you, Grace Townley, for the use of the Star Formation image.  I want to extend many thanks to the Leawood Foundation, the Arti Gras show, and juror James Martin for accepting my work into this year's show, and for making their logo available for use.  The image of Rose Dance is my own. It may be re-posted online, as long as the image is not altered, and credit is given to me as the artist, with a link back. Otherwise, all rights are reserved.
Posted by Jan Gephardt at 1:41 AM No comments: