Should we call it the Leawood Arts District? 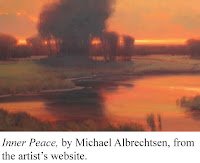 Something artistic is happening out there, and we should take note.

By "out there," I mean what many in the Kansas City Metro think of as "out there" in southern Johnson County, KS. 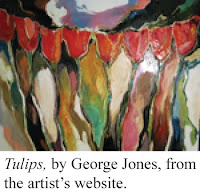 I'll be the first to grant that southern Johnson County doesn't exactly have a reputation for being stylish or artistic. Much of the artistic community around town tends to think of it with a What's the Matter with Kansas? frame of mind: as a wasteland of white-bread suburbanites in cookie-cutter plastic palaces.

If you think of it that way, however, you haven't been paying attention. 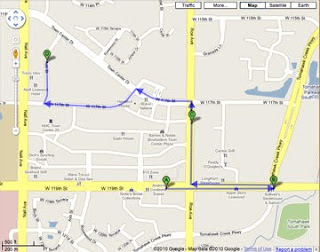 I recently attended the Johnson County Art Crawl, held Friday and Saturday, July 16-17, 2010.  Four of the five galleries on the itinerary are located in a relatively small area between 115th and 119th Streets, bounded on the west by Nall Avenue, and on the east by Tomahawk Creek Parkway--an area that I've started calling the Leawood Arts District. I couldn't get the link to Google Maps to work right, so I've included a screen shot.

A person in good walking shoes could have walked, Kansas City Crossroads-style, between the Prairiebrooke Gallery (A on the map), Eva Reynolds Fine Art Gallery (B), Leawood Fine Art Gallery (C) and The Rice Gallery of Fine Art (D).  However, unlike in the Crossroads, parking was not an issue, so it was easy to drive.  The fifth location was only a few blocks away, at the Tomahawk Ridge Community Center, which now hosts Overland Park's "Art at the Center" series. 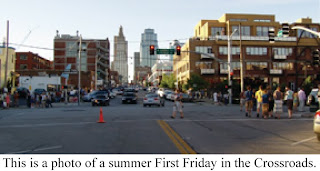 There were no colorful crowds on the streets, such as you see on First Fridays in the Crossroads, but other aspects of the event compared very well.  The artwork I saw on display was easily equal to, or better than, much of what you typically see on a First Friday.  These galleries also had efficient air conditioning, decent wine, fresh hors d'oeuvres, and good live music.

The art on offer was a nice mix of local and nationally-known artists.  In several cases, the artists were both nationally-known and local!  Examples are the first Kansas City solo show by Michael Albrechtsen at the Rice Gallery, an exhibition by sculptor Tom Corbin at the Eva Reynolds Gallery, and several new, large paintings by George Jones, featured at Prairiebrooke.  "The Abstracts Exhibition," a collection of works selected by Friends of Overland Park Arts, was the attraction at Tomahawk Ridge, and a group show featuring work by many of the gallery's excellent artists was the focus at Leawood Fine Arts.

These five are by no means the only art galleries in Johnson County--nor are they the only good ones.  What should command the attention of every art lover in the KC metro, however, is the relative concentration of them in this fairly small area, and the uniformly high quality of the offerings to be found in the Leawood Arts District.
Posted by Jan Gephardt at 5:02 PM No comments:

We know individuals have personalities that are uniquely their own, and that artists develop a recognizable personal style.

But I never was so clearly aware of how much a gallery can have its own individual style or personality, until recently. My husband and I were rambling through the Kansas City Crossroads Arts District when we encountered two examples of how distinctive a gallery’s “personality” could be.

The first was the new 2010 Gallery at 2010 Main Street, Kansas City, MO. We walked in and immediately “recognized” the wall colorings and characteristic groupings of images on the walls. After a few moments we recognized some individual artists’ work, as well. “Wait!” We both thought, “This looks like the Park Place!” 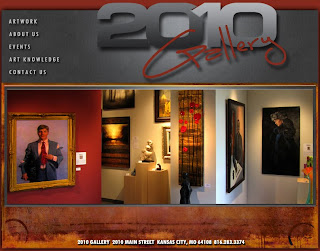 At left is the homepage for their website.  It gives a good idea of 2010 Gallery's look.

We’d been to the Park Place Gallery in Leawood, KS seven months earlier, but we knew it had closed soon after we were there. The “look” of 2010 Gallery was unmistakably similar. We later discovered that we’d been correct: this was the new “incarnation” of the same gallery. 2010, like Park Place, is the work of Tim Morrison and Rachelle Craig. We’re glad to see them back! 2010 Gallery is a strong new addition to the Crossroads. 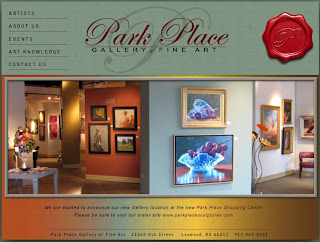 At right is a screen shot of the Park Place homepage.  See the similarities?

The second wasn’t as much of a surprise—we already knew that Red Star Studios had moved from their former 17th Street location to the Belger Arts Center at 2100 Walnut St., Kansas City, MO. Red Star not only has gone through a change of location, but it also is transitioning to new ownership. The manager, ceramic artist Tara Dawley, brings consistency to the transition, because she also was manager and deeply involved in the “old” Red Star, owned by fiber artist Susan Hill. 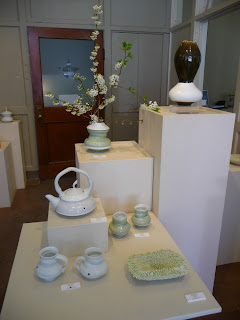 The wide-open space at Belger is much different from the rather tight quarters of the old gallery space on 17th Street, but the display strategies are consistent. They feature white, neutral, or rich, finished-wood surfaces and 3-dimensional groupings to show off the work of the gallery’s ceramic artists.
At left is an example of a display in Red Star's old 17th St. gallery.  It shows the work of Mike Jabbur and Michael Fujita. 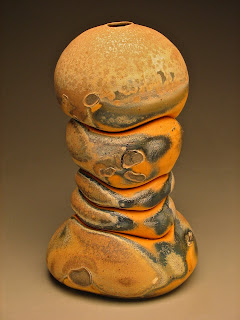 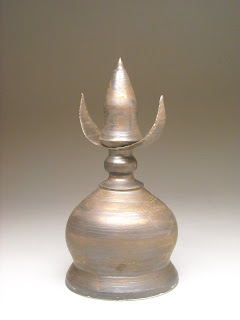 Red Star Studios is a distinctive asset for the Kansas City arts scene. It consistently brings in work by top ceramic artists from all over the US and Canada (my apologies if their offerings are even more international than that!).
According gallery staff and a conversation I had with Susan Hill at the Prairie Village Art Fair in June, the Belger Arts Center is not Red Star’s final destination. Ultimately, they will once again occupy their own space, somewhere else in central Kansas City. But for now they are alive and well at Belger, and we are glad for the chance to see their artists’ work again.  Anyone who is interested in the ceramic arts should pay close attention to their shows.


Discovering respected “old friends” in new places is a pleasant experience. I am excited to see both of these “old friend” galleries settling gracefully into the Kansas City Crossroads Arts District. I hope you will soon go see them for yourself!
Posted by Jan Gephardt at 10:01 AM No comments: