A Matter of Style

Individuality shines through.  I'll give you an example.

Dorothy Dent and Michael Albrechtsen are both artists with devoted followings and successful careers, though their paths to success have been different.  They both favor oil paints, and frequently paint North American landscapes in a fairly traditional manner.  Both are spiritual persons, and do not hesitate to use references to God or religious expression in their titles.  Both travel considerable distances several times a year, to teach seminars.


I recently viewed exhibitions of each artist's work within a bit more than a week.  Albrechtsen's work comprises the main show at the Rice Gallery in Leawood, KS this month.  I encountered Dent's work on a recent trip to Republic, MO.  I was immediately struck by their similarities--but also by the marked differences in their approaches to very similar subjects.

Here are some examples. 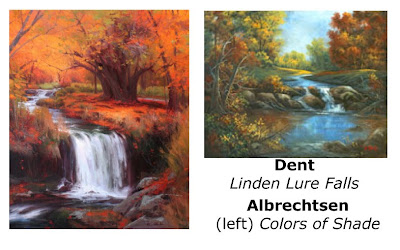 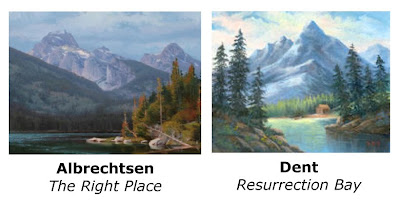 The 1958 documentary 4 Artists Paint 1 Tree shows four artists painting a tree en pleine air in a California field.  Each artist has a markedly different style, so each tree painting looks distinctly different, even though the original model was the same tree.

It's really pretty cool, I think.  Individuality shines through.
Posted by Jan Gephardt at 9:27 PM 1 comment: